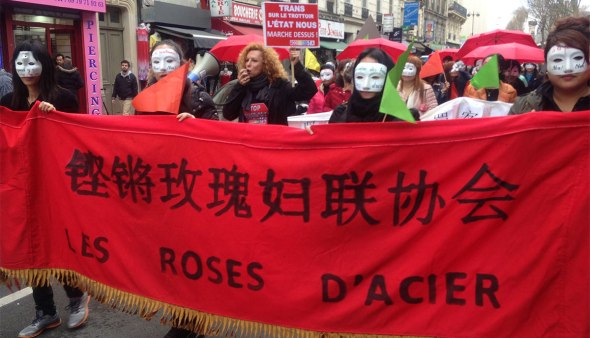 (Source: Unknown. Please leave a comment if you are the copyright holder of this photo.)

The Steel Roses Fight Against Violence Against Women

[Edited and supplemented Google-Translation of the French original]

On the final day of the fundraising period, The Steel Roses successfully reached their funding target of 3,000 euros. Thank you to everyone who shared this campaign, and an even bigger thanks to the 53 backers! You all helped to allow Chinese migrant sex workers in France to work more safely. 非常感谢你 ! Merci beaucoup! Thank you very much! Vielen Dank! ¡Muchas gracias!

One week left to help fund a Chinese smartphone app and alarm systems for Chinese women in precarious situations in France. Click here to support The Steel Roses now!

Please note: The fundraiser is hosted by Les Co-citoyens, a French non-profit association. To make a donation, you will need to create an account, which is very simple. Please don’t let this turn you off from contributing to The Steel Roses’ important fundraiser.

Continue reading: 1. Who are The Steel Roses; 2. The Situation; 3. The Project

1. Who are The Steel Roses? 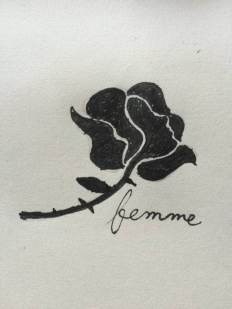 Les Roses d’Acier (铿锵玫瑰), established in 2014, is an association mainly made up of Chinese women in precarious situations and Chinese sex workers. The group’s objectives are to facilitate access to health for Chinese migrant women; to fight against all forms of violence and discrimination against women in precarious situations and sex workers; to defend the fundamental rights of sex workers; and to promote mutual aid and solidarity. Through our community support and mutual aid actions within the sex worker community, we also contribute to the fight against violence against women and the exploitation of women.

Learn more about the Steel Roses

What gives them the right to judge us? | Article by The Steel Roses in “Sex Workers Speak: Who Listens?” (Ed. P.G. Macioti, Giulia Garofalo Geymonat; Publisher: Beyond Trafficking and Slavery, Open Democracy) Article | Entire Booklet [PDF]

Aying on the wall and a visitor on the 4th floor of @gladstonehotel on the first day of my solo featured @contactphoto exhibition Paris: Baras/ Les Roses d'Acier. Les Roses d'Acier part is on the 4th floor (Baras on the 3rd) and is the story of a group of current and former Chinese sex workers in Paris. I worked on the story between 2014 and 2015 with journalist @ambissada. Text design on the wall by @markphilipgordonbain. 043016. Runs till May 30th. #baraslesrosesdacier #paris #toronto #photography #contactfestival #lesrosesdacier

Chinese women who are in precarious situations – due to their residency statuses, their language barrier, poverty, or their lack of knowledge of their rights – represent easy targets and are particularly exposed to all forms of violence. Perpetrators of violence can safely assume that these women will have no means to physically or legally defend themselves, for instance by filing police reports.

Ever since the adoption of Law No. 2016-444, which criminalizes sex workers’ clients, in April 2016, assaults targeting sex workers have increased. As a result of this law, sex workers have to work harder and take greater risks to support themselves.

“What do sex workers think about the French Prostitution Act? | Study by Médecins du monde (Doctors of the World) on the Impact of the Law From 13 April 2016 Against the “Prostitution System”; Authors: Hélène Le Bail, Calogero Giametta, Noémie Rassouw. English [PDF] | French [PDF]

The Steel Roses aim to create a smartphone app and emergency call system.

Anti-violence app in Chinese. This app enables users to trigger a text alert that is sent to three pre-assigned emergency contacts, together with the geolocation of the user and an audio recording triggered automatically and sent every minute.

The app is connected to keychain with an alarm button, which makes it possible to trigger the alert remotely over a distance of 15 meters, even when the smartphone is in standby. The keychain also features a 120-decibel emergency alarm.

The Steel Roses will support users of this app and also offer self-defense courses.

For the future, the organization plans to set up a hotline so that all users can add The Steel Roses as one of their emergency contacts.

What will the funds be used for?

Purchase of 100 alarm self-defense devices at a cost of €30 per unit.

As mentioned above, the fundraiser is hosted by Les Co-citoyens, a French non-profit association. To make a donation, you will need to create an account, which is very simple (click image to enlarge). Please don’t let this turn you off from contributing to The Steel Roses’ important fundraiser. As of January 14, the fundraiser is over 70 percent funded with 7 days to go!

This edited and supplemented Google translation of the French original was created by Matthias Lehmann for SWAT – Sex Workers + Allies Translate, Edit + Design.

“The aim of SWAT is not only to provide sex workers and allies with a network to enable sex work knowledge sharing across as cultural and language barriers, but also to reward contributors for their work whenever possible.”