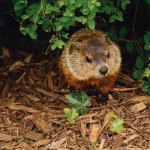 The government’s actual goal was “to quietly abolish prostitution under the guise of helping people in prostitution. … Whoever still believes that the Prostitutes Protection Act was intended to protect sex workers also believes that woodchucks chuck wood.”

Voice4Sexworkers, a project by and for sex workers, rubbishes recent media reports suggesting the law had failed to achieve its stated goals.

ProstSchG well on its way to achieve Conservatives’ goals

A flurry of recent media reports have suggested the Prostitutes Protection Act (herafter ProstSchG) had failed to achieve its stated goals and would not sufficiently protect people engaged in prostitution.

The ProstSchG is well on its way to achieve all of the federal government’s desired goals and effects, especially those of the conservative parties [Angela Merkel’s Christian Democratic Union (CDU) and the Christian Social Union (CSU) in Bavaria, together known as die Union]. It may have taken a while, but now, around two years after the ProstSchG went into effect on July 1, 2017, it has become increasingly apparent that the law’s consequences, which we expected and predicted, have materialized up and down the country.

Why feminists (or anyone, really) should choose their words, images¹ and fonts² wisely 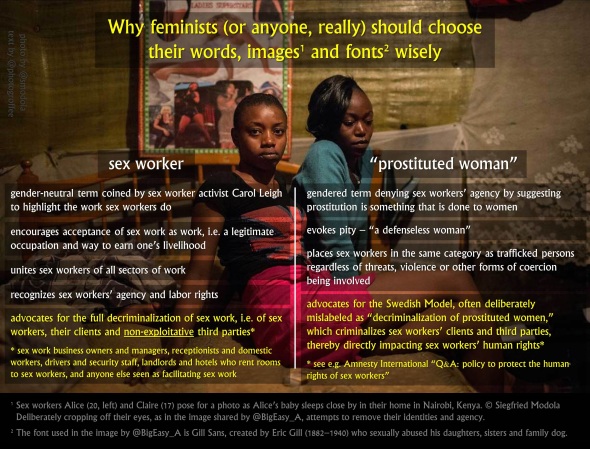 Response to an image posted by user A (@BigEasy_A, see below) in the comment thread underneath Susan Sarandon’s somewhat surprising, yet welcome about-face (she had previously lend her support to Cambodian prostitution abolitionist Somaly Mam, disgraced in 2014 for fabricating stories to raise funds).

Sources used for the above image include “Language Matters: Talking About Sex Work” by Chez Stella, “The Decriminalisation of Third Parties” by NSWP, and “Unfair labour arrangements and precarious working conditions in the sex industry” by ICRSE.

Sex work is a job just like any other, but its criminalization exposes sex workers to discrimination, abuse & exploitation. Talking about it is the first step to reducing the stigma, but decriminalization is the only way to implement safeguards to protect those in this industry. https://t.co/hCymAQJbN3

Sweden: No Country for Sex-Working Mothers

Mother is devastated by court ruling.

The mother worked as a sex worker in a village in Östra Göinge, where she advertised  her services via the internet. She started doing so after running into financial troubles when her son was only two to three months. She invited men into her apartment and had sex with them for money. Her earnings amounted to around 2,000-2,300 euros per month.

The mother and her son lived more or less isolated, except for the visits from her clients, who stopped having sex with the mother if the boy woke up in his crib next to the bed. The mother said the boy never seemed to be scared but was curious of them. When the boy would wake up, the men went home, understanding the situation since they had children of their own, according to the Administrative Court’s ruling.

Everything came into the open after a concerned person reported the mother to social services, whereupon the son was taken into care. This happened without any formal evaluation of the situation, although the mother’s actions were confirmed by her online ads.

In Sweden we just found out that a mother lost custody of her baby because she was a sex worker and now an ambassador for the green party @miljopartiet, @mptukia has been forced out of politics after stating that sex work is work and that sex workers have human rights.

The Administrative Court attached special importance to the fact that the mother had invited strangers buying sex into her home. According to the court, the overall situation meant that there was a significant risk that the son’s health and development would be harmed.

By her own account, the mother closed the book on sex work since her son was taken into care. However, the Administrative Court believed there was a risk that she would repeat her behaviour and has therefore decided that the son should remain in state care in accordance with the Care of Young Persons Act (LVU). In addition, the court held that the mother had shown indifference regarding the safety and protection of her son by bringing male strangers to her apartment.

Instead of sex work, the mother will now look for other work and in the meantime, she has applied for government support, although she  realises that those payments won’t be as high as the 2,000-2,300 euros she earned from sex work. The woman also stated that she had resumed contact with her own mother, who had promised to help her.

Click on the image to read the full article

Translation for SWAT by Ophelia Eglentyn from Fuckförbundet, an association founded in Sweden in the spring of 2017, by and for sex workers.

“Our two key functions are to uphold a community that offers support for all kinds of sex workers in Sweden, and to raise the awareness on sex workers rights and the negative impacts from the current set of laws. … If your feminism excludes marginalized groups of people then it’s not worthy of it’s name.”

“The aim of SWAT is not only to provide sex workers and allies with a network to enable sex work knowledge sharing across as cultural and language barriers, but also to reward contributors for their work whenever possible.”

1 The Swedish original of this article was written by Carl-Johan Liljedahl and first published as “Barn till prostituerad omhändertas” (Child of prostitute taken into care) at Kristianstadsbladet (January 13th, 2018). The terms “prostitution/prostitute” and “sex buyer” were replaced with “sex work/sex worker” and “client.” The copyright for the original article lies with Kristianstadsbladet. It is not licensed under a Creative Commons License.

The images and tweets above and below did not appear in the original article. Translations of articles do not represent endorsements of titles, images, terms used or views expressed therein, or of the authors who have written or the media outlets that published them.

"Not even five years after the custody battle of Petite Jasmine, a woman in Sweden loses custody of her child for working as a #sexwork-er."

Screenshot from VICE report (see below)

“Is this really these elderly women’s dirty problem or is it a problem caused by the ordinary people who point their fingers at them? I think it’s our society’s problem.”

At the start of this year, VICE UK published a video report by Matt Shea about the “South Korean Love Industry”, which wasn’t only nonsensical and factually incorrect on many occasions, but also a text book example of unethical journalism as well as of a sexualised orientalist gaze. In that report, Lee Ho-sun appeared as well, although at the time, she was affiliated with a different institution, called Seoul Venture University; the one she is apparently affiliated with now is a private Christian university. Not only did Lee Ho-sun state in the VICE report that “Bacchus Ladies are destroying the traditional sense of value in Korea” but she also didn’t object to – or allowed herself to get tricked into – Matt Shea filming secretly while she interviewed elderly sex workers.

Elderly poverty in Korea in general and the fact that poor elderly turn to sex work to survive are certainly issues that need to be addressed and deserve attention. However, due to the inclusion of statements by Lee Ho-sun, I recommend reading an overall better two-part report by Heo Seung instead, published in 2013 by Hankyoreh, a South Korean daily which has published several respectful pieces on sex work. Please note that this recommendation does not represent an endorsement of all terms used in both the English and the Korean version of the report.

Due to time constraints, this article will not be translated into English. Please see a short summary at the bottom.

The above are a few quick comments about Fabian Kretschmer’s article “Debate about prostitution in South Korea: Miss Kim is fighting for her job”. While overall, the article is informative and provides some of the key points of the current debate in South Korea, the terminology used is inept and a quick fact check reveals several inaccuracies and crucial omissions. As is often the case, Mr Kretschmer (or his editor) seem to have felt the need to include statistics, although no reliable data about sex work in South Korea is available, not even in the reports commissioned by the Ministry of Gender Equality and Family. Positive are the choice of title, photo and caption, all of which are by no means a matter of course, and the fact that a German newspaper reported at all about the ongoing constitutional review of South Korea’s Anti-Sex Trade Law.

The Anti-Sex Trade Laws – are they unconstitutional?

“On April 9th, 2015, a public hearing was held at South Korea’s constitutional court regarding the constitutionality of the Anti-Sex Trade Laws. These laws are not simply laws that aim to punish buyers and sellers of sexual services, but have far wider implications. The laws encompass social issues including sexual morality, sexual self-determination, and the right to choose one’s vocation. In this light, Giant Girls Network for Sex Workers’ Rights will hold a panel discussion to review the aforementioned public hearing. The event will be held on Sunday, June 28th, 2015. Thank you for your interest and participation.”

Anyone unfamiliar with the ongoing constitutional review of South Korea’s Anti-Sex Trade Laws might find it helpful to read Choe Sang-Hun’s recent summary in the New York Times. Please note that this recommendation does not represent an endorsement of the terminology used therein.

On this day, the National Solidarity of Sex Workers Day was organised, after the Special Anti-Sex Trade Law [which includes a Prevention Act and a Punishment Act] was passed in 2004. Since then, the date is commemorated as Korean Sex Workers Day to honour all sex workers who have contributed to the struggle against discrimination over the years.