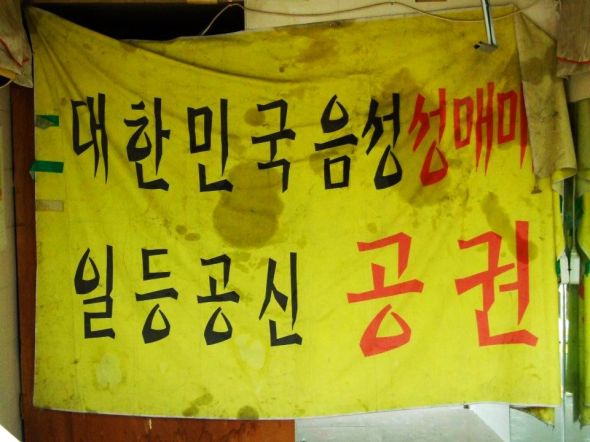 “The biggest contributor to pushing sex work underground are the authorities.” A banner – previously used at the press conference by the Hanteo National Union of Sex Workers – hangs forlorn between two brothels in Yeongdeungpo, Seoul, as the red light district is closed on Korean Sex Workers’ Day 2012. (Photo by Matthias Lehmann)

In 2011, the Hyundai Research Institute published the findings of a survey commissioned by the Hanteo National Union of Sex Workers. It examined “the changes in public opinions on sex trade after the enactment of the Anti-Trade Sex Law” in South Korea based on interviews with 1,000 adults from different age groups and all walks of life in a nationwide telephone survey.

The report, a copy of which I had received by Hyun Joon KANG, Director-General of Hanteo, has now been translated into English from the Korean original by Yeon Ju OH, Research Fellow at Nanyang Technological University, Singapore.

Yeon Ju OH is a co-editor of Cyberfeminism 2.0 and has been researching women in technology, the relationship between gender and new media technologies, and feminist knowledge production. Her interests include the transnationalisation of feminist knowledge.

I would like to express my sincere gratitude to Ms Oh who volunteered to translate the report to make it accessible to a wider audience and help to further a better knowledge exchange between the global south and north.

In September 2000, the notorious Gunsan Brothel Fire killed five women who had been held captive. Their tragic deaths exposed the conditions in Korea’s sex industry and triggered a campaign by women’s rights activists to reform the country’s prostitution laws. Their proposals became the blueprint for the Special Laws on Sex Trade (성매매 특별법, Seongmaemae tteukbyeol beob), enacted in 2004, which include a Protection and Prevention Act and a Punishment Act, which penalises both buyers and sellers of sexual acts with up to one year in prison or fines up to 3 million won (approx. £1,715/€2,075/$2,825), except for those who were coerced into selling sex. Those who force others to sell sex are subject to up to 10 years in prison or fines of up to 100 million won (approx. £57,000/€70,000/$94,000).

The Anti-Sex Trade Law of 2004 replaced the Law Against Morally Depraved Behaviours (Prostitution) of 1961  (윤락행위등방지법, Yullak haengui deung bangji beob). Interestingly, the new law replaced the term “prostitution” (윤락) with “sex trade/sex trafficking” (성매매) as the former was found to imply the “moral corruption of the engaged women” while the latter was deemed to be neutral in value. What this illustrates, however, is the law’s disregard of sex work as an act of self-determination and the definition of transactional sex, i.e. the receipt of monetary or other material benefits in exchange for sexual acts, as inherently exploitative.

By passing the Anti-Sex Trade Law, the government vowed to eliminate prostitution and protect victims of exploitation and violence in the sex industry, drawing inspiration from the so-called Swedish Model that criminalises the buyers of sexual acts. Although representatives of the Swedish government continue to claim that the law successfully reduced prostitution and human trafficking, a 2011 report by the Swedish police found that between 2008 and 2010, all those criminal offences the Sex Purchase Act from 1999 was supposed to tackle had actually increased, including a number of human trafficking offences, the purchase of sexual services and even the purchase of sex acts with children. In November 2013, Equality Minister Maria Arnholm voiced her concern that “prostitution in Sweden today is more affected by trafficking, compared to seven years ago” and announced to further examine the effects of Sweden’s prostitution law.

The Ministry of Gender Equality celebrated the Anti-Sex Trade Law legislation as a milestone achievement that would “vigorously strengthen the protection of the human rights of women in prostitution”. However, others criticised the legislation’s discriminatory attitude towards sex workers, who remain criminalised unless they claim to be victims. This “distinction between victims and those who [voluntarily] sell sex is actually one between protection and punishment” and categorises women into “good women who are worthy of help” and “bad ones who need to be punished”, thus continuing the stigmatisation of women who sell sex.

Challenges of the Anti-Sex Trade Law

In June 2006, the Korean Constitutional Court ruled 8:1 to uphold the law in the “So-called Brothel Building Provider Case”. A complainant who owned buildings in a red light district had argued that since his properties could not be leased out for any purpose other than brothels, regulating and punishing the leasing out as thus excessively infringed upon his right to property. The judges dismissed his complaint arguing that “the public good that may be achieved by preventing the deep-seated abuse and infringement of human rights of sexual traffic in the brothel area, and ultimately closing down the brothel area itself” was of greater importance “than the short term private losses suffered by the complainant”.

In January 2013, Criminal Law Judge OH Won Chan from the District Court in Northern Seoul accepted the request of a 41-year-old sex worker, surnamed Kim, for the legal examination of the Anti-Sex Trade Law and referred the case to the Constitutional Court for judgement. Kim had been fined 500,000 won (approx. £285/€345/$470) for selling sex in violation of the laws. The request is based on the premise that in the absence of coercion or exploitation, sex work should fall within an individual’s right to self-determination and that adults have the right to engage in consensual sexual acts without the state’s interference.

Korean legal experts appear to agree with that notion. According to HAN Sang Hee, professor at Konkuk University Law School in Seoul, “the policy approach to sex work in South Korea has centred on regulation [punishment], viewing it simply as an ‘evil’. The significance of this constitutionality review request is that it positions sex work as a matter of women’s rights and provides a starting point for a debate on expanding women’s rights to self-determination.” And according to HOH Il Tae, professor at Dong-A University Law School in Seoul, “criminal punishment should be a last resort. The state needs to refrain from interfering in personal matters that do not involve sexual acts with minors. The responsibility of the state is to monitor, protect, and/or provide appropriate education for the women who engage in sex work to earn money and the men who purchase their services.”

Public Opinion: An ineffective law in dire need of reform

The survey by the Hyundai Research Institute revealed that 23.2% of respondents believed sex trade* had increased since the enactment of Anti-Sex Trade Law, while 8.9% thought it had declined. The highest percentage (49.9%) thought the law had made “no difference”. While 29.3% of the respondents thought, the abolition of red-light districts had a positive impact on efforts to eradicate sex trade, in most respondent groups, the percentage of those who felt it had neither a positive nor a negative impact was higher. In addition, 58.8% believed that covert sex trade had increased since the enactment of the Anti-Sex Trade Law, while 7.4% said it had decreased (No difference: 24.9%). 46.1% of respondents answered that the number of sex workers travelling to work abroad had increased since the enactment of law, while 3.3% said the number had decreased. (No difference: 21.3%, Do not know/Unanswered: 29.3%)

These answers clearly indicate that the majority of respondents did not view the implementation of the Anti-Sex Trade Law as effective in reducing sex trade. It comes as no surprise then that 39.6% of the respondents did not agree that the law had been implemented in accordance with its original purpose and that 73.3% said the law should be reformed, mirroring what sex workers in South Korea have been campaigning for ever since the law was introduced. The constitutionality review of the Anti-Sex Trade Law was scheduled to conclude six months after the submission of the request. A year on, however, no decision has been announced and the persecution of sex workers continues.

*These passages are quoted and paraphrased from the English translation of the report. As mentioned above, the term “성매매 (seongmaemae)” can be translated as either “sex trade” or “sex trafficking”. The Ministry of Gender Equality and Family uses the translation “sexual traffic”.